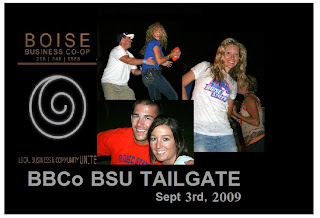 (Click here to go to the album)
The Boise Business Co-Op is not only an organization that supports local businesses; the BBCo is part of the community and therefore a member of the Bronco Nation.
Yesterday was the Boise Business Co-Ops first BSU Tailgate Party. As a member of the BBCo, Viral Intermedia was aware of the plans for the traditional pre-game party but given that this was our first tailgate we were delighted by the actual experience.
There was no shortage of tailgate events happening all around us to be sure. The sights, sounds and smells (of a thousand BBQ’s going at once) were truly a spectacle to behold. Compared to some of the celebratory enclaves, the BBCo’s tailgate seemed rather staid and reserved…at first. Just like their popular ‘Music on the Waterfront’ Free Summer Concert Series at Lake Harbor, people were a little slow trickling in but once the grill was fired up and the Band (Soul Serene) started getting things hopping – the event started picking up mojo.
What started out as a group connected by business networking ideals soon became a family of sorts. Folks were dancing, visiting, singing and once the game started playing on the 8 foot inflatable screen – cheering and celebrating as a unified group. Many passers-by stopped to check out the BBCo celebration and were promptly invited to join the ‘family’. Some of the visitors were even covered in green and gold; they were fed and made welcome like out everyone else.
It was simply a great way to spend a Thursday Summer night and I confess I liik forward to the next one.
**Disclaimer and note from the writer: I have to admit I can't see very well when taking pictures at night. The BBco's first tailgate party was a success. Dori, Luc and I were invited to a couple tailgate parties and we visited most of them but I will say I was impressed with BBCo's setup: Band Stand (Soul Serene), BBQ, Multiple large tents and tables...the works!**
Posted by VIP eugeboy at 12:02 PM